A ring buffer, also known as a circular buffer or cyclic buffer, is a very useful data structure for certain situations, and worth having around in your programmer’s toolchest. It’s a fixed-size buffer but treated as though it’s connected end to end (that is, the end is connected to the start) and data is written and read in a FIFO (first-in first-out) way. Usually this is all hidden behind an API to make it easy to read and write to it.

They are often used when there is a need to read and write data in a streaming manner, for example, streaming audio to a sound card, I/O buffering for a UART in an embedded device, and in fact any I/O buffer situation (e.g. a network device or a disk). Because the buffer is fixed in size you know what the memory footprint will be up front and this makes it ideal for use in embedded systems or on consoles where memory is constrained and you don’t want to dynamically allocate memory.

You can imagine a ring buffer as a circular block of memory that cycles around like this (the numbers represent the indices into the block of memory, which is treated as an array of bytes): 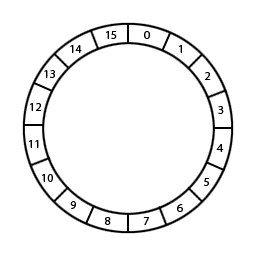 But of course in reality the memory is really laid out like this:

The current read and write locations in the buffer are tracked, and the ring buffer operation is as follows:

We know we’ve run out of space for writing when we reach the read location, and we know we have no more data to read when we reach the write location. In those cases we can just stop and return the amount of data actually written or read.

Phew! That seems complicated! Let’s break this down and look at how we might implement it. We need to keep track of a few things:

The read and write indices represent where the current read and write location is in the buffer (these could instead be kept as pointers if we wanted).

In my implementation I also choose to track:

We can actually avoid tracking these two if we want, but it makes everything a bit clearer and doesn’t cost us much more.

We also want to be able to read and write to the buffer. Let’s sketch out a class for what we have so far:

We have two possible situations we need to handle when implementing reading and writing. The case where the current write index is greater than the current read index:

For the figure 4 case, we have just one region, from the current write index to just before the current read index (index 1 to 8 inclusive):

Fig. 6 – One region for writing

When there are two regions, it’s possible that the length of data we want to write or read isn’t enough to take us into the second region! So we may only end up requiring one region. Clamping the length makes it easy to determine this without a whole lot of nested if statements, because we can compare the clamped length to the remaining bytes in the buffer from the current read or write index. I think this is easier to explain in code, so putting this all together, we can come up with a write function like this:

And that’s it! There is a full implementation available here. Note that it makes no attempt to be thread safe! You should lock as appropriate if you use this in a multi-threaded environment.

Next time we’ll look at using this class to dynamically generate a continuous audio stream!